Is blockchain the problem or the solution? How will it impact the ag industry? What exactly is blockchain? These are all questions that were discussed in the “Blockchain in Ag” event, hosted on February 26 by Genesis Feed Technologies and The Grand Farm.

The idea for the event came to Peter Schott, CEO and co-founder of agtech startup Genesis Feed Technologies, after hearing conflicting theories about the impact of blockchain in agriculture.

“I have a lot of very smart friends saying blockchain is the way of the future for the supply chain, and other friends that say blockchain is a solution looking for a problem to solve,” Schott said. “I wanted to have an honest conversation around what this technology is, what are the ways people are looking at using it, and what are different problems and opportunities to be solved.”

Schott approached Andrew Jason, Director of Ecosystem at Emerging Prairie, and together they arranged a two hour lineup that included two panels, two keynotes, and a series of company and investor pitches, featuring leaders in agriculture and technology from “Bangkok to Bozeman,” as Schott remarked.

Excitement around the event built almost immediately, and over 250 people across the globe tuned in that Friday morning. The chat lit up with discussion as speakers shared use cases, projections for the impact of blockchain in agriculture, and debated if it’s even necessary at all.

How and why is blockchain used?

The first session, moderated by “Future of Agriculture” podcast host Tim Hammerich, tackled questions about how blockchain is being used in the ag industry. Blockchain, as Schott describes, is basically “a fancy leger system that tracks and verifies a transaction, and can’t be broken.” What benefit does a leger system like blockchain bring to agriculture? During the panel, many of the answers centered around two things: traceability and data management.

“We thought the value prop was connecting data together,” said Rory O’Sullivan, founder and CEO of Grain Discovery in Ontario Canada. “But the real value prop is the feedback loop that we’re getting from the growers.”

Supply chains already capture so much great data, he explained, but often the systems don’t talk to each other. Using blockchain allows information to be passed along the supply chain participants, creating what O’Sullivan called a “more informed feedback loop.”

Brandon Hunnicut, a 5th generation farmer in Nebraska and board member with the National Corn Growers Association, added that this kind of data tracking can be used to create “smart contracts”—immutable proof based off blockchain verification that your product has met the necessary requirements for quality and production.

“We could use checkboxes to say, ‘Yeah I did this, so I met this goal.’ But if I can now have more data, and a smart contract that…proves what I did out there — if that’s worth 10 to 15 cents more a bushel, that becomes significant money,” Hunnicut said.

Dragan Boscovic, founder and CEO of Vizlore group in Arizona, was quick to point out that, “blockchain is as good as the data that goes into the blockchain.” The benefit is that once the data is recorded it’s very difficult to change, creating immutability—however, if garbage data goes in it is useless, Boscovic said.

Nevertheless, the entire panel shared excitement at the potential for using blockchain to increase efficiences and sustainability in agriculture. Hunnicut encouraged other farmers to take a look at blockchain technology, drawing a parallel to how computers or new tools such as Auto-Steer were first met with skepticism, but now have transformed the ag industry.

“A lot of people backed away from those early technologies because we were trying to understand what it was. But the early adopters could see the vast potential,” Hunnicut said. “I think that’s where we’re at right now with blockchain.”

Call for an open, public blockchain

Marieke de Ruyter de Wildt, founder of the New Fork in Amsterdam, started her keynote by emphasizing one key message: “There are different types of blockchain, as with all technologies,” she said. “We want to make the case for an open public blockchain.”

Wildt founded The New Fork in 2017 with the goal of achieving global food integrity through blockchain technology. They are currently working on a public blockchain solution called “The Open Food Chain,” and have already established S.O.S., Sustainable Open Soy blockchain that is free for farms, and offers scaleable blockchain tracing for soy attributes. This, Wildt argues, is the ideal way blockchain should be set up for agriculture.

“In agrifood, supply chains are long and complex,” Wildt said. “We think that a necessary requirement is that everybody should be able to join the blockchain, ideally on their own account, and create the most decentralized government we can have.”

The other benefits of an open blockchain, Wildt goes on, are; there are no transaction costs; autonomous onboarding, allowing even small holders to join; open source code, allowing the technology to be enhanced by everyone while remaining independent from one tech company, and supply chain owned solutions.

“At the New Fork, we don’t own the solution and we don’t want to,” Wildt said. “We believe the solution should be owned by the supply chain itself.” 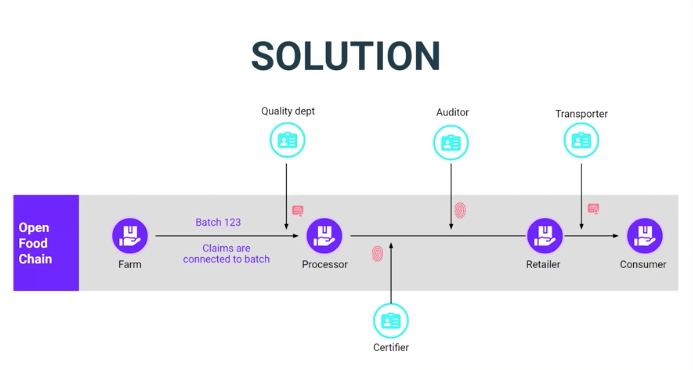 Blockchain: A hammer looking for a nail?

Other speakers throughout the event were cheerleaders for blockchain—Bharath Lingam, CEO at [x]Cube LABS, posited that blockchain would help build bridges across diverse global farms and establish supply chain integrity. Bridie Ohlsson, CEO of Geora, tuned in from South Wales, Australia to share about how blockchain is being used in a commercial space—giving a specific example of a pig farmer in Papua New Guinea who is using Geora’s commercial blockchain platform and RFID tags to create traceable and verifiable digital records of their pigs and assets. Investor pitches from Yield Lab, Cultivation Capital, and Bread and Butter Ventures stated they are interested in implementing blockchain solutions and see it as part of the future of agtech.

But what about the other side of the coin? Connie Bowen, Director of Innovation and Investment for AgLaunch in Memphis, TN, moderated a final debate on the pros and cons of blockchain. Emma Weston, CEO and Co-founder of AgriDigital, argued the case for the benefits of blockchain. JP Rhea, a 5th generation farmer who farms over 10,000 acres in northeast Nebraska (not far from previous speaker Brandon Hunnicut), argued as a skeptic of blockchain.

“To me, blockchain is a hammer in search of a nail,” Rhea said. “In organics, we have to have boots on the ground for traceability. If we don’t have trust in the people putting info into the blockchain, it doesn’t work. I’m not anti-blockchain, I just don’t see it as a solution that is truly solving the issues we’re facing.”

Weston challenged the thinking, saying that rather than searching for problems, blockchain is “a diverse technology that is opening up new questions about deep and entrenched problems.”

“I want to take us back to the internet and how we thought about it’s application to the food system,” she said. “The reality is, we didn’t.”

Weston argued that blockchain has potential not just for connecting data points, but connecting the data to monetization. Smart contracts, for instance, are an efficient way to automate workflows by taking a series of nonsequential steps and turning them into one transaction, she said. This can create incentives to connect payment for data, and create fruitful behavior around traceability. As for “bad actors” messing up the data in the blockchain— “that is a much bigger problem than the utility and value of blockchain,” she said. “What we can do with blockchain, is incentivize good behavior—so that bad behavior is invalidated by the supply chain itself.”

In conclusion, Rhea summarized that while he is not anti-blockchain, he does hope that the conversation can pivot towards problem-solving and less about blockchain hype.

“As farmers…we have problems that we want to solve,” he said. “I would much rather hear widespread conversation around how to solve these problems and then bring the right technologies to bear, rather than making a case for a particular technology over the others.”

Keeping up the blockchain buzz

The general buzz around the topics, from the speakers and the 250+ participants, validated that what Schott and Jason had organized was something people are excited about. In fact, Schott said, they are already planning follow-up events such as a conversation on Clubhouse, and future virtual or in-person meet-ups.

“I was blown away with the success of the event. It was such an exciting conversation, and amazing to see people tuning in from everywhere, at all different time zones—Australia, India, Germany, Thailand, all across the U.S., and more,” Peter said. “We’re definitely planning to continue the conversation, and continue exploring the different applications of blockchain in agriculture.”