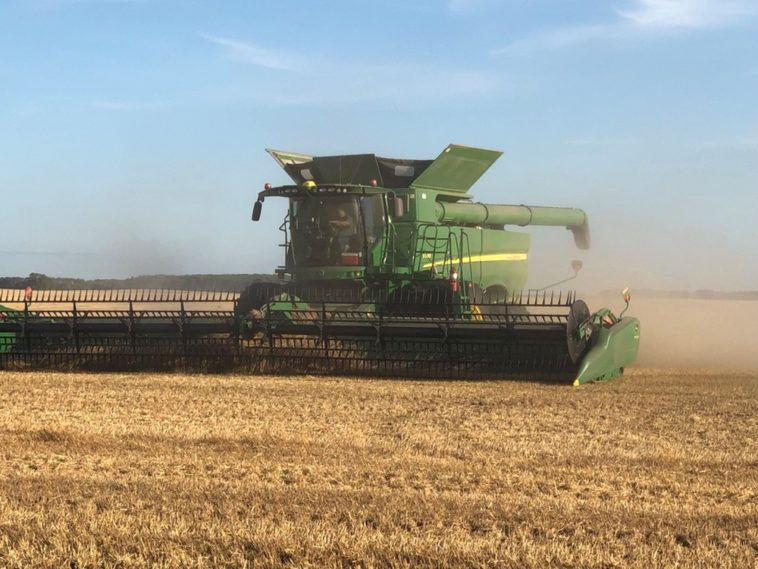 It’s a short drive from the city but it quickly feels like hundreds of miles away, almost like another part of the world. What you assume is a quiet road is one where it’s not unusual to follow a combine driving along or yield to large trucks full of grain. There are fields of round baled hay as far as the eye can see and fields of corn, wheat and beans just begging to be harvested.

With the hustle and bustle of the growing Fargo-Moorhead area, it’s easy to forget how close we are to one of the busiest, most abundant agricultural production areas of the world, one which may seem slow-paced and simple but which is actually bursting with technology, innovation and hard work around the clock.

The Red River Valley is full of areas just like that – small in the number of office buildings, restaurants and apartments, yet large in acreage, production and hours spent in the field by men and women who plant, care for and harvest crops we all enjoy in various forms every day.

For many farmers, there’s a certain responsibility that comes with the chosen profession. And while everyone’s story of why they farm is different, many go into the farming business because of family history and legacy, especially in this region.

That word: Legacy. It’s a powerful one and one with multiple definitions. One example: something transmitted or received from an ancestor or predecessor, or from the past.

For Skaurud Grain Farms (SGF) of Gary, MN, legacy has a similar meaning. The farm was founded in 1962 by Clayton and Phyllis Skaurud, and is now operated by second and third-generation family members, including sons Perry and Kelly, and grandsons, Evan and Cory, and operations manager, Matt.

When thinking back to his desire to join the business 15 years ago, Evan summed it up, highlighting that one special word.

“There’s something about carrying on the family legacy, being part of what my grandparents started more than 50 years ago,” he said.

Evan’s father, Kelly felt a similar calling to be part of the business and, along with his brother, Perry, formed the SGF partnership in 1977.

SGF’s legacy goes beyond the family members and even the traditional meaning of the word itself. It encompasses shared feelings and vision – feelings of pride for the past and a vision that respects the future. The business is committed to carrying this out in two key areas that have helped the farm thrive in the past and will continue to build its future: technology and land stewardship.

The SGF team is a big believer in the power and value that precision agriculture technology has on the farm.

“We started in the early days with AutoTrac, then variable rate planting, and we’ve continued to implement new technology along the way,” Kelly says. “We’re always trying to be progressive and always looking for new efficiencies.”

Efficiency and ROI being the drivers of their technology solutions, SGF doesn’t just look for the latest-and-greatest for the sake of having it. The team is strategic and thoughtful when exploring new opportunities.

“We look at the return a technology can provide,” Evan said. “It goes beyond the obvious time and money savings, we look deeper at things that factor in, like fewer hours on our tractors, less fatigue on our operators and reducing stress for all our team members. All those pieces add up to savings and ROI.”

Another key piece to SGF’s technology puzzle is the support the team receives from its partner, RDO Equipment Co.

Ag Product Specialist, Ben Hilde, had known the Skauruds for years prior to last summer, when they partnered with him to find a John Deere sprayer with ExactApply precision technology. He has continued to work with them ever since, helping them learn about opportunities and making sure the technology works for them.

“They’re early adopters of technology but that doesn’t make them immune to challenges,” Ben said. “What’s great is they’re eager to learn and open to change.”

One recent example is when SGF transitioned from John Deere Greenstar™ 3 to Generation 4 displays. While the learning curve regarding the actual displays and controls wasn’t a difficult adjustment, the backend data and working with files posed a challenge; specifically, integrating multiple data sources and from a mix of programs and companies.

“When farmers have multiple data sets from different sources, it’s common to experience difficulties bringing it all together,” Ben explained.

However, Jim Murn, Agronomist for SGF, says part of working with technology is change and a willingness to adapt.

“We have to find new ways to look at the same information,” he said. “It can be frustrating, but we rely on data and imagery to be efficient and make the best decisions. We can’t be afraid of changing how we do things or learning new systems.”

Linked to the Land

For SGF, land stewardship is more than an idea or words – it’s a key focus in nearly every decision made and action taken.

“It’s about more than growing quality crops,” Kelly said. “We have a strong belief in and are intentional about preserving our environment and protecting the land and surrounding habitats.”

SGF practices methods like cover cropping, erosion control and pollinators. Along with these, technology also plays a role in the Skaurud’s commitment to land stewardship. The company was familiar with precision spraying technology, but it wasn’t until this past summer that the team implemented its first Deere sprayers equipped with ExactApply technology and took another step towards responsible practices.

“The sprayer offers targeted nozzle pressure and individual nozzle control,” Ben said. He further explained, “other sprayers have the ability to control sections of nozzles, but not the control of each individual nozzle that ExactApply offers.”

Not only does this level of precision spraying allow farmers to hit that sweet spot of efficiency – not over-spraying and wasting material yet not underapplying and risking yield loss – it further enhances SGF’s land stewardship mission.

“We’re intentional with everything we spray to be sure we’re not over-spraying or risking drift from excess material,” Jim said. “The system gives us greater control of application while tracking all data related to when and what was applied, as well as additional factors like weather.”

“We can prove both our attention to detail and demonstrate our commitment to being responsible in our efforts,” Jim said.

Looking Back and Looking Ahead

The guys agree it has been fun to see how the industry has evolved over the years. For Jim, one of the most significant changes has come from imagery – both satellite and UAV – as it relates to crop scouting, one of his key jobs as an Agronomist.

“I used to spend a lot of time out in the fields, looking for everything from plant stress and water issues to weeds and pests,” he said. “Now, I can review the imagery and see exactly where problems exist in the field, then focus my time and effort where it’s needed most.”

Kelly marvels at the size and scale changes that have taken place, saying, “Everything is bigger. It’s the horsepower, it’s going from eight-row planters back in the day to 24-row seeming huge, to now operating 48-row.”

While Evan’s time on the farm has been comparatively shorter, he’s excited to see the industry build on current autonomous technology and the continuous move towards more autonomous farming, even sharing his thoughts on what an autonomous farm looks like – and equally important, what it doesn’t.

“No matter how advanced autonomy gets, people are never going to be replaced on the farm,” he said and further explained, “I visualize a farm where the smaller or workhorse machines are autonomous, but there are lead vehicles that still have an operator kind of managing the entire fleet on the farm. I also see key roles like the Agronomist still being crucial, and potential for new roles to be created, those that can help manage the equipment and make sure it’s doing what it should.”

While no one can predict for certain what the next five, ten or more years will look like for the agriculture industry, Skaurud Grain Farms can look ahead with confidence that the farm’s legacy will live on and thrive – no matter what changes come.

The Evolution of Technology

Then
Precision agriculture was born from the opportunity created by GPS and GNSS. The simple ability for a farmer to know his or her precise position in the field opened the door to possibilities for data collection and analysis.

Now
The evolution of precision agriculture has gone beyond the equipment in the field. UAVs are one of the newest opportunities farmers are using to scout crops, identify areas of plant stress and apply instant decision-making to minimize yield loss.